Profits vs Margins vs Revenues: How Much Do Shoe Manufacturing Companies Really Make?

Few things get people more agitated over business ethics than prices and profits. However, as has been observed elsewhere, there are few things people are more ignorant of than the relationship between the prices they pay for products and the profits earned by those who make the products. Some freely confuse revenues with profits. Others may avoid that mistake, but then conflate profits with margins. Revenues generated by retailers are confused with the revenues of manufacturers. The net result is a lot of ill-informed talk that that leaves people even more misinformed than they were when they got started. 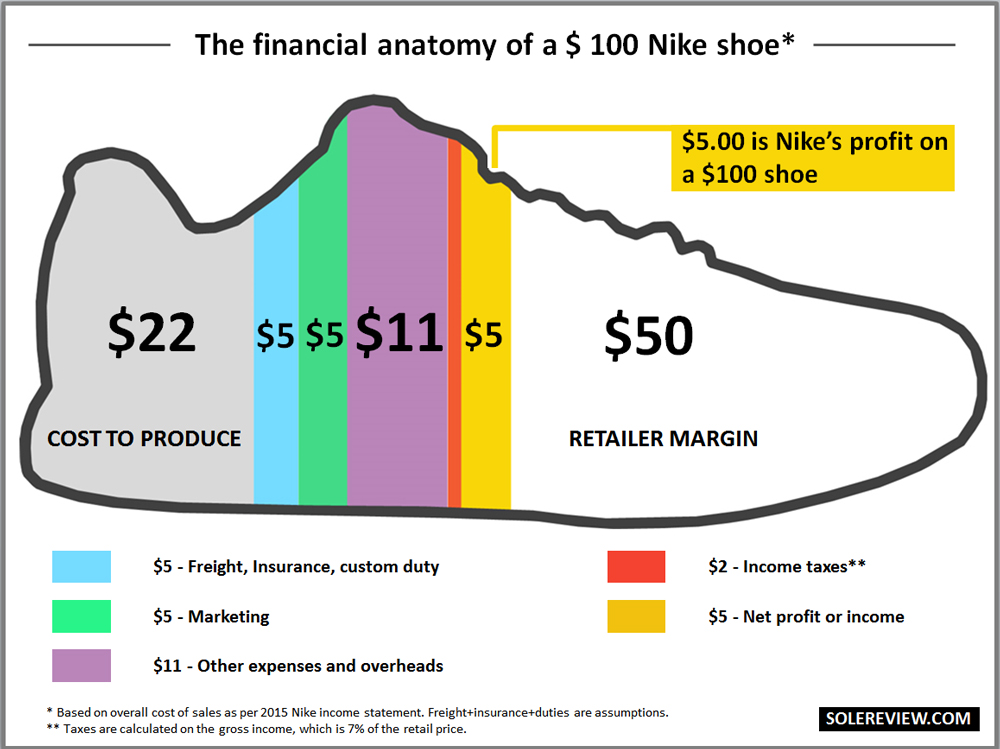 This post at Solereview lays out in excruciating detail the revenues and costs associated with manufacturing and marketing athletic shoes, using publicly available information from shoe manufacturers Adidas, Asics, and Nike. You may still be outraged after reading it, of course. But if you are, your outrage will at least be better informed. >>>

LINK: WHAT DOES IT COST TO MAKE A RUNNING SHOE? (by solereview)

For as long as we can remember, we’ve been reading comments such as these on the internet:

‘ Nike makes their shoes for $2 dollars.’

‘ Sneakers could be considerably cheaper if brands stopped paying all that money to Kanye West, Stephen Curry and Lebron James’.

‘I bought a shoe worth $200 for just $50 on Black Friday, and the shoe company is probably still making a lot of money.’
…
We thought it would be even more helpful to tell you what are the exact costs involved to make specific models, and what kind of profits entities involved in the business ultimately end up making. Because as you’ll soon discover, factory costs happen to be only a tiny part of the entire story.
…
In other words, for a shoe priced at $100, adidas earned just $2.05 and Nike made $5.3. But didn’t we just say that a $160 shoe is produced for $30?

So where does the rest of the money disappear? …