The item below is about an episode of the animated children’s show, “Peppa Pig.” This episode of the popular show, which originates in the UK, tries to get kids not to fear spiders. Spiders, it points out, are harmless things you can pick up and play with. But the show is broadcast internationally, and in Australia for example — where hundreds of people are hospitalized each year due to spider bites — that message turns out to be a dangerous one.

Just how cautious should television producers and broadcasters be? Are companies that produce TV shows responsible for how their shows will be received and understood in every country they might be broadcast in, forever?

LINK: Peppa Pig ‘spiders can’t hurt you’ episode pulled off air in Australia – again (by Naaman Zhou for The Guardian)

This advice from the British-produced show was deemed to be “inappropriate for Australian audiences” and the ABC banned it from future broadcast. The episode had not been broadcast on TV because of its unsuitability, but was “accidentally published online due to a technical problem”, the ABC said at the time.
…
The channel initially refused to pull the episode, saying Mister Skinny Legs “did not look real”.

“The episode is light-hearted, friendly and very mild in impact; the overarching message of the episode is about respecting all creatures,” it said.

“The context of the way the spider is portrayed in the episode lessens any impact of scariness or danger; the spider does not look real, it has a smiley face and is shown in context of a show with other talking animals.”

But after being contacted by media, Nick Jr said it would remove the episode from programming rotation, despite continuing to maintain that it “does meet our criteria”…. 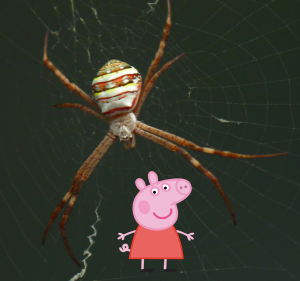